In August 2012, the United States Securities and Ex change Commission (“SEC”) issued its final rules regarding “Conflict Minerals” (known as ‘3TG’ – Tan talum, Tin, Tungsten and Gold) as defined in and required by section 1502 of the Dodd – Frank Wall Street Reform and Consumer Protection Act (the “Act”). As a result, many companies are now fo cusing on whether and to what extent their products contain Conflict Minerals and whether such Conflict Minerals come from the Democratic Republic of Congo and the adjoining countries named in the Act.

We are committed to ensuring the health, safety and protection of people who come into contact with our products and business, and we require high social, environmental and human rights standards among our suppliers. Managing our obligations in relation to Conflict Minerals is a part of this corporate responsibility.

We are working towards ensuring that our products d o not contain Conflict Minerals that have been so urced from mines that support or fund conflict within the Democratic Republic of Congo or adjoining countries . Therefore we are committed to identifying which SBH Industriesysteme GmbH products are impacted and targeting our efforts accordingly not buying products and materials containing Conflict Minerals directly from Conflict Mines. Asking our suppliers to work towards ensuring that any Conflict Minerals contained in the products and materials supplied to SBH Industriesysteme GmbH originate from Conflict. Free sources contributing to conflict – free trade by encouraging our suppliers not to discriminate against legitimate sources of Conflict Minerals. In addition, we are committed to engaging with our customers regarding their disclosure obligations.

In working towards these commitments, we have taken a number of steps that include:

Requiring our suppliers to implement a policy regarding Conflict Minerals and exercise due diligence to investigate the source of these minerals engaging with our suppliers so that they respond i n a timely manner to our requests for evidence of compliance. In the future, our suppliers’ willingness to comply with this initiative will be a factor in our sourcing decisions updating the SBH Industriesysteme GmbH Supplier Code of Conduct and our purchasing terms and conditions to reflect this policy. 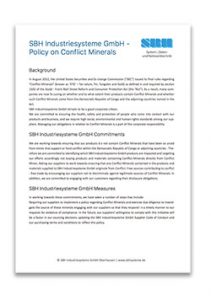